Valve Cover Racing has become a fun event with car clubs all over the country. Unfortunately, there is very little commonality between clubs in terms of the race car specifications and track design. If Valve Cover Racing is to become an NEMG”T”R event at GOF’s, it needed: specifications for the design and construction of the valve cover race car; a race track which has a infrared finish line detection system, a smooth transition from the incline to the run out section, and can be transported to the GOF’s; and a set of racing rules. A race track has been designed and the necessary rules & specifications have been written. These have already been tested at four GOF’s. Revisions have been made when suggestions were made by car owners and spectators to arrive at a set of rules and specifications which are finalized and now published herein. There were times when a race car did not meet the original specifications. To accommodate these racer cars, a separate race class, called the “Outlaw Class”, has been established so they could race against each other instead of being disqualified (DSQ). Another part of the Valve Cover Racing event is to include a “Beauty Contest” where, by popular vote, car owners and spectators vote for the car of their choice. The number of competing cars and spectators is growing.

Another feature of the racing event is the double elimination scoring. When a car loses a race, that car later races another car that also lost a race. The car that loses a race the second time is then eliminated from completion. This method allows the owner of a race car that lost the first race, time to go to the pit area and make adjustments to service his car and try again. It also gives the owner of a “slower” car the opportunity to run in at least two competitive races on the track.

This is an event where everyone has a fun time. Get a valve cover, four wheels, and with a little ingenuity join in the fun. It is our hope to have a valve cover race at every GOF but having the race will be decided on a GOF by GOF basis. The track is to be stored at the Sander’s and transported to the GOF, when needed, on the flat bed truck. Your comments and suggestions are welcomed and will be considered by the committee for use at future events.

Click on the tabs to view the rules and specifications

The first item to note is the two different classes for racing: they are the “NEMG“T”R Conformist” class and the “NEMG“T”R Outlaw” class. The first has the rigid set of specifications for consistency and the second class is established for those who want to have almost no bounds except for track limitations and a few other practical items. The detailed specifications are self explanatory.

Since a racing number is required to be permanently fixed to each racer, a register of racing numbers has been established so that two identical numbers will not be on two different racers. To register the racing number of your choice, you must e-mail Hal Kramer with a first and second choice of a number along with your NEMG“T”R number and e-mail address. You will receive a conformation for the number to use on your racer.

Race rules are also necessary to maintain consistency for races at all future GOF’s when valve cover racing is scheduled as an event.

The “Outlaw Class” has only one (1) sub-class race at the present time. This may need to change if this class becomes very large. This event is just beginning so rules will be revised as necessary after races are completed.

At the option of the GOF planner, other non-racing activity can take place as shown above. Some very interesting car designs, decorations and other facets of valve cover racing show up at an event. The choice of these to be held is again at the discretion of the event planner.

The track will consist of one eight feet long incline and two eight feet long flat run-out sections. The major features of this track design are the curved smooth transition at the bottom of the incline section (to prevent racers from bouncing off of the track at the bottom of the incline) and the center and side rails (to prevent racers from leaving their lane and crossing into the other lane or off the track). The dimensional specifications of the track are self-explanatory except the rear height of the incline section (TBD) which is to be determined at the time of construction. Present indication is that it will be approximately three (3) feet.

Perhaps it is important to also point out that the starting will be a mechanically controlled board, three (3) inches high across the start line so that the forward most part of the racer is on the start line. The reason to use a board instead of a pin is because the winning racer is electronically detected at the finish by the first item to break an infrared optical beam. This is expected to eliminate any arguments as to which car is the winner of the race. 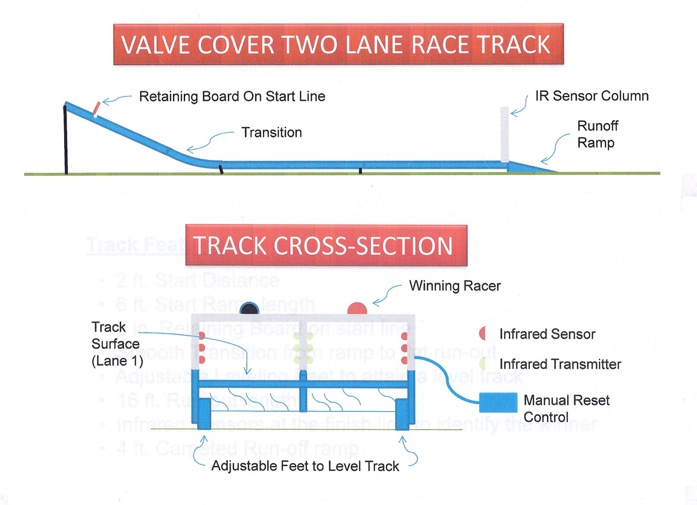 Car racing numbers are available between 1 and 100.  Select three different numbers for your first, second and third choices from the lists in the form.
If the first choice is assigned, your second choice number will be used.  If choices one and two are already assigned, your third choice number will be used. If the third choice is also assigned you will be contacted by either phone or e-mail by the Race Master.  After your racing number has been registered, you will receive a written confirmation for that number.
If your race car has not yet been registered already, complete this form and press the submit button at the bottom of the form.